to determine properties of tensile and longation as per ASTM D - 638 / ASTM D – 882 of plastics – Eco version.

* Equipment with other capacities could also be supplied as per the requirement. 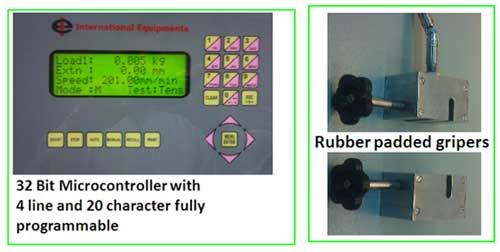 Graphic Display And Printout Through Pc

In addition to the above reports, further values like Young’s modulus, Yield stress, Yield point, Standard deviation, Intermediate result and Load Vs Elongation graph could be obtained by attaching a printer to the PC.

Through the pc this will be a multi unit display as well as printout where by the operational units would be kg, cm, pound, inch, newton & mm for conversions in any combination.